Paul Watson is the founder of the Sea Shepherd Conservation Society, a non-governmental organisation that protects seals, dolphins, whales, sharks, turtles and other marine animals.

In 1968 and early 1970, he joined the Canadian Coast Guard where he served aboard search and rescue vessels.

In October 1969, he joined the Sierra Club, a group protesting against nuclear testing on Amchitka Island. The group formed in that protest resulted in the Don’t Make a Wave Committee, now Greenpeace.[/vc_column_text][/vc_column]

He travelled as a crew member on board the Greenpeace ship Too!

He was captain of the Greenpeace vessel Astral.

Paul Watson continued as a crew member and Greenpeace director on board for several voyages throughout the decade.

In 1977, Watson was voted off the board of directors of Greenpeace by a vote of 11 to 1. Watson subsequently left the group and, that same year, founded his own group, the Sea Shepherd Conservation Society.

Watson served as First Officer under Captain John Cormack on the voyage to engage the Soviet whaling fleet.

In June 1975, Paul Watson and Robert Hunter were the first people to risk their lives to protect the whales, when Watson put his Zodiac speedboat between the Soviet harpoon ship and a pod of sperm whales.

During the confrontation with the Russian whaler, a harpooned and dying sperm whale was dropped over Watson’s small boat.

As Watson recognised a flicker of understanding in the dying whale’s gaze, he sensed that the whale knew what they were trying to do. Watson watched as the whale forcefully turned its body away from his boat, slipping beneath the waves and dying. A few seconds of looking into the eye of the dying whale changed his life forever. He vowed to become a lifelong advocate for whales and all creatures of the sea. 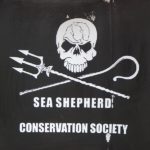 The Sea Shepherd Conservation Society, founded in 1997 by Paul Watson, is an international non-profit marine wildlife conservation organisation (NGO) whose mission is to end habitat destruction and the killing of wildlife in the world’s oceans in order to protect and conserve the ecosystem and species. Their campaigns are guided by the United Nations World Charter for Nature (1982) and other laws that protect marine species and their environments.

They operate a fleet called Neptune’s Navy, consisting of the MY Steve Irwin of which Paul Watson is the captain, the MY Bob Barker, the MY Sam Simon and the MV Brigitte Bardot, as well as several smaller vessels.
Recently (its first mission was made public on 9 January 2014), the Jairo Mora Sandoval joined the fleet.
They had previously incorporated the trimaran Ady Gil, formerly Earthrace, which holds a circumnavigation speed record.
This vessel was sunk on 6 January 2010 after being rammed by a Japanese whaler. Following its loss, Sea Shepherd acquired the vessel MV Gojira, now known as the MV Brigitte Bardot.

Sunday at 16.00 h. (Spanish time) live from the United States

Diving with dolphins in Roatan

Something you don’t know about Tabaiba in Tenerife